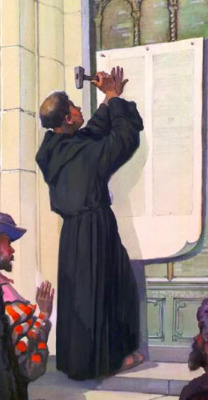 Every year at Redeemer during the last weekend of October, known as Reformation Weekend, we celebrate the great truths of the historic Protestant Reformation of the 16th century that were preserved and passed on in Christ's church. These truths can be summarized in "The Five Solas of the Reformation." The “five solas” is a term used to designate five great foundational rallying cries of the Protestant reformers. They are as follows: “Sola Scriptura” (Scripture Alone); “Sola Gratia” (Grace Alone); “Sola Fide” (Faith Alone); “Solus Christus” (Christ Alone); and “Soli Deo Gloria” (To God Alone Be Glory). For a fuller description of these rich Biblical truths we recommend the following article: The Five Solas of the Reformation, by James Montgomery Boice.

To listen to our past Reformation weekend conferences click "launch audio" below.