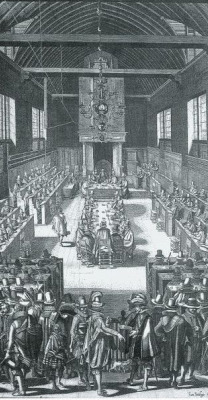 We are a Christian Church that believes in the Bible. We hold fast to "the faith that was once and for all delivered to the saints" (Jude 3) We confess and believe all that is taught in the Old and New Testaments, which are the inspired and infallible word of God. We summarize Scriptural teaching regarding the holy Trinity and Christ in the great ecumenical creeds of the ancient church:

The Three Forms of Unity:

We also confess the "Three Forms of Unity" as a faithful summary of what the Bible teaches.

1. The Belgic Confession of Faith

It is usually called the Belgic Confession because it originated in the Southern Netherlands, now known as Belgium. It was written in 1561 by Guido de Brès. He was a preacher of the Reformed Churches of the Netherlands. It was adopted by the Synod of Dort (pictured here) in 1618-19.

This document is also known as the "catechism of comfort" due to it's pastoral and highly personal approach to the faith. It was written in Heidelberg by two German theologians, Zacharius Ursinus and Caspar Olevianus and it was adopted by the Synod of Heidelberg in 1563. It was written to instruct children and new converts in the Faith.

3. The Canons of Dort

This is the document that originated the well known concept of the "5 Points of Calvinism". Also known as the Five Articles against the Remonstrants, the Canons of Dort were adopted at the Synod of Dort in 1618-1619. They were written to define Reformed doctrine and reject the teaching of Arminius and his followers.